Could this be “The One” for North Georgia?

I have been asking myself and the models this question repeatedly over the past few days, and neither I nor them have come to an answer. Since my last update, the overall expectations haven’t changed very much. The models are still showing a deep eastern trough developing mid/late next week which will bring below normal temperatures for most everyone east of the Mississippi River, including portions of Northern Florida. This means we have a lot to talk about, so lets get started.

First off, the indices. As you can see below, the models are still showing the NAO remaining negative, though a few members do push it briefly neutral. Also below are the PNA forecasts. As you can see, all models spike the PNA quite positive by next weekend, but diverge from there.

I’ve had some questions (rightly so) from folks wondering what exactly the NAO/PNA are, so lets briefly explain the two indices.

Basically, the PNA is the pressure of the area near the west coast of the United States. A positive PNA means there is high pressure and a negative PNA means there is low pressure. A positive PNA, as illustrated below using an image from today’s 18z (1PM) GFS run, generally results in cold air being dumped from Canada into the central/eastern United States, while the western states warm up. A positive PNA also allows areas of energy in the atmosphere to travel farther south, giving us our gulf lows that lead to snow. A negative PNA generally results in warmer temperatures over the eastern US.

The NAO is basically the pressure over the North Atlantic. When there is a low pressure system, you have a +NAO (makes total sense, right?). This usually results in a high pressure developing over the east/SE United States, and dry conditions as well. A -NAO occurs when there is a high pressure system over Greenland or the Northern Atlantic, as seen below in the same image as before. This helps to usher the cold air in from Canada and acts as a “blocking” high to keep it in the eastern US. 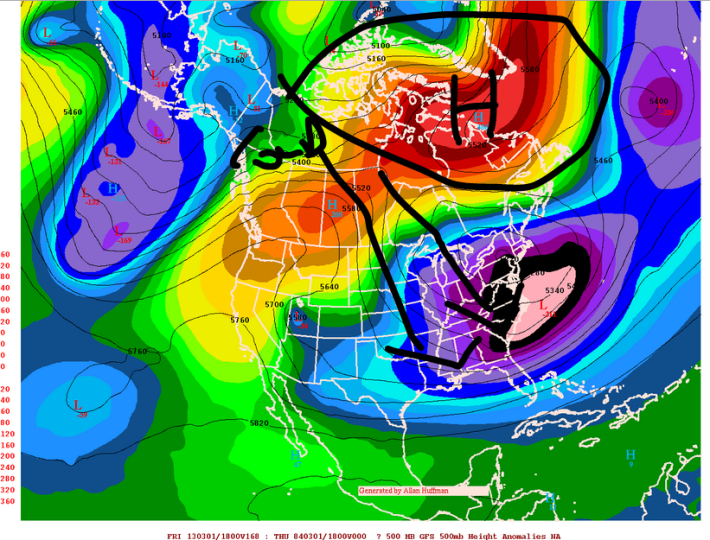 Now that we have those explained, you may be thinking: “Hey, we have both indexes in positions to bring us cold weather!”. If so, you are right. By mid/late next week a giant trough is expected to develop across the eastern US, bringing very cold air along with it. Given this kind of an upper level set up, temperatures will NOT be a problem as far as producing snow goes, IF we have a storm develop, which is the next topic of interest.

I’ll start this off with yesterday’s 12z Canadian model which had the weather world dreaming of whiteout conditions yesterday.

Above is the 240 hour forecast (10 days). As you can see it was advertising a very strong weather system moving through, and it dumped 6-12″ of snow on a good chunk of the Southeast, depending on what the snow ratios (how much snow per inch of rain) wound up being. So far, this type of solution has been the exception and not the rule, however the Euro showed something similar but displaced farther east a couple days ago, and there have been several runs of both the GFS/Euro that have been close. Since its 12z run yesterday, the Canadian model (GGEM) hasn’t shown a big system come inland again, but instead it has been “suppressing” , or sending the low pressure systems to Cuba instead of up the coast. It has at least kept the storm, which leads me to believe one is going to occur next weekend for someone between Cuba and Maine. I have an unusual amount of faith in the GGEM, based soley on the fact that it was recently upgraded to a 4D-VAR system. What is that? Well, for all intensive purposes it is just a new set of equations the model uses to do a better job. Before now, we haven’t had any major global models run this system (except the UKMET that only goes out to 144 hours) but it is expected to excel, especially over the American Models currently being used (GFS/NAM). I guess we will find out.

As of this moment, the main problem I have with next weekend is just how strong the blocking will actually be. The last few days the models have been showing a very stubborn low pressure system, circled below, in the NE. Basically this vortex acts as a shredder for any pieces of energy in the atmosphere moving towards the Gulf of Mexico. Where this vortex sets up will be crucial to our snow chances for next weekend. Ideally, you want this low pressure system (which is associated with the -NAO coming up) to set up near Newfoundland right around 50ºN, 50ºW lat/long. This is where this low derives the name 50/50 low from, and it helps to a) not shred systems apart and b) make them turn up the coast instead of fly out to sea. Unfortunately the blocking (-NAO) is set up too far SW forcing this low into the US instead of keeping it where we want it. 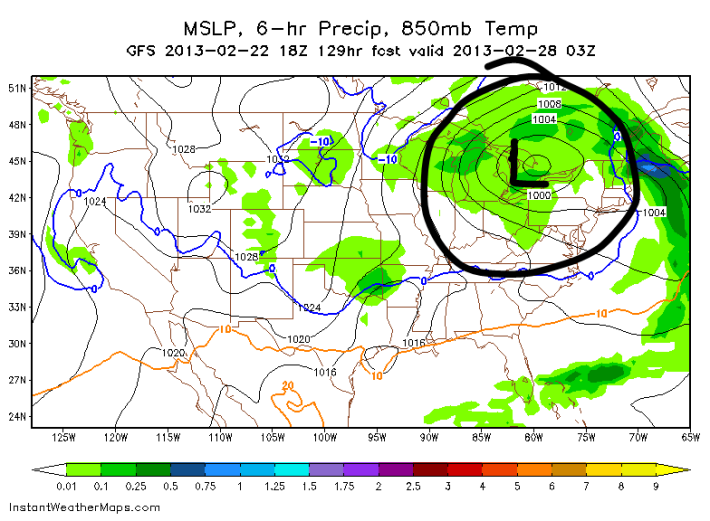 We have seen numerous times this winter that the models tend to overdo both blocking and cold outbreaks in the 7-10 day range. So the question appears: are they this time? I have to lean towards a less cold/less strong blocking solution this go around since that has been the theme this winter. This should help our 50/50 low to get closer to 50/50, and thus allow the numerous pieces of energy coming towards us to not get shredded apart. The southern stream doesn’t look like it is going to die down any time soon, either, so we should maintain a healthy supply of storm systems (possibly strong, as shown by the Canadian) cruising towards our area for the next week and a half. Ultimately time will tell, and by this time next week it could be cold, windy, and dry, or we could have a snowstorm bearing down on us.

I am certainly hoping, and for the moment leaning, towards the latter.